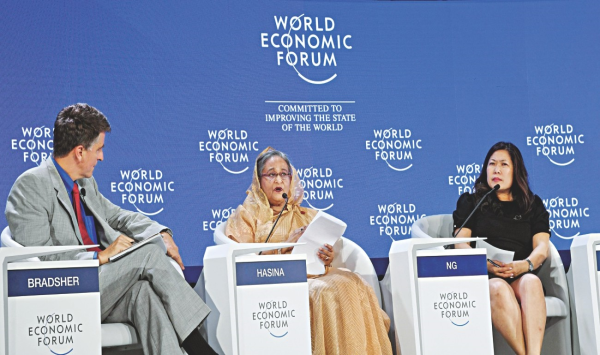 Peace and fair contest, not rivalry

Prime Minister Sheikh Hasina yesterday placed a five-point proposal, including creation of an environment of peace and fair competition by all countries staying away from rivalries, to make any Indo-Pacific initiative a success.

“Over a five-decade of my journey in politics tells me that any initiative in Indo-Pacific should include creation of an environment of peace-harmony-stability of all countries; focusing on entire aspects of sustainable development; engaging countries based on mutual trust and mutual respect for mutual benefit; focusing on wealth creation for all, development must be inclusive; and creating fair competition, not rivalries,” she said.

Hasina was addressing a panel discussion during the “Annual Meeting of the New Champions 2019” of the World Economic Forum (WEF) at Dalian International Conference Centre in Dalian city.

The July 1-3 meeting, also known as WEF Summer Davos, is being held with the theme of “Leadership 4.0 - Succeeding in a New Era of Globalisation”.

Hasina said, “We sometimes look just in terms of the capacity of a few large economies or their needs. But we must address the key concerns of smaller communities or relatively weaker economies for our collective journey and sustainable world.”